In our ASA classes we practice several COB sailing techniques. We learn how to get the boat back to the person in the water.

The next step is how to get the person out of the water and back on the boat.

This guy Duncan Wells has some ideas.

Besides classes on the school boat, we really have a lot of fun helping new boat owners figure out their boat and learn how to rig and sail it better.

Sometimes the boat is big like this Maple Leaf 60 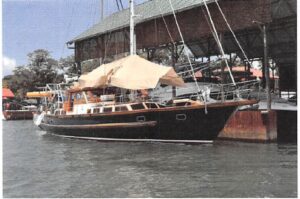 and sometimes it is a family boat for someone to have fun on the weekends with a couple of teenagers. 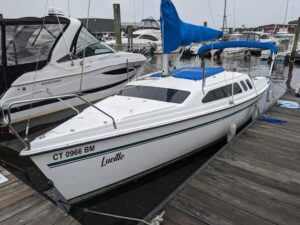 Sailing is my peace. Luckily, I have had the opportunity to share this with my children. After my boys (10 and 12) completed their distance learning, we set sail on New Dawn to spend the afternoon replenishing our souls. Sailing provides a refuge from wearing a mask outside, from having to think about COVID19, from having to think about the challenges our world is currently facing. Sailing is an escape. You are one with the salt, sea, sun and wind. You are living for today and enjoying each moment breathing in the freshness that being out on the water without an engine can offer. The smiles say a thousand words without saying one… 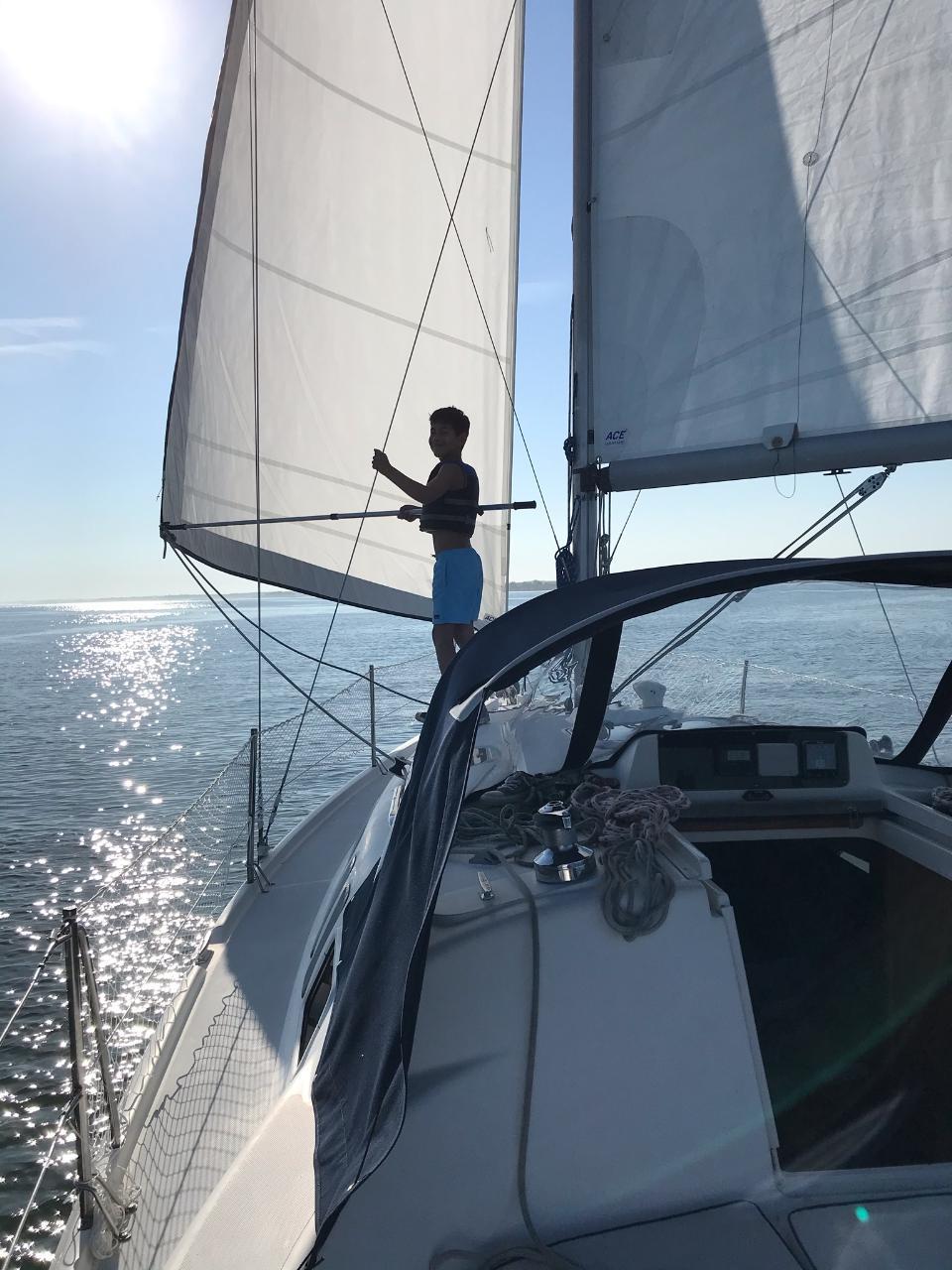 “You must live in the present, launch yourself on every wave, find your eternity in each moment. Fools stand on their island of opportunities and look toward another land. There is no other land; there is no other life but this.” ~ Henry David Thoreau

Because I spend so many days teaching sailing, I don’t get to charter as often as I would like. In the summer of 2018, my wife and I decided to take a charter someplace exotic for our anniversary. We have chartered in the BVI and USVI before and wanted to go somewhere different.

We settled on St. Vincent and the Grenadines. One problem with chartering is that most of the boats are large and expensive. We wanted a small boat that the two of us could handle by ourselves. It is considered wise to charter with a first or second tier charter company to have a chance of getting a boat in good condition. The only boat we could find that was small enough and inexpensive enough was from Barefoot Charters.

The boat had some charging problems, we had a hard time keeping the refrigerator cold, but other than that it seemed to be OK. I’m very used to sailing and dealing with older sailboats.

After a couple of days of sailing, we ended up on the island of Mayreau in Salt Whistle Bay. Up to that point, the trip was uneventful. We were not looking to push ourselves too hard, so we stayed two nights in Mayreau.

The day we were to leave we got up early. I started the engine and went up forward to release the mooring while Diane drove. The mooring field was mostly full. There were boats moored all around us and coral shoals all around. The wind was about fifteen knots.

Within a few minutes, after I released the mooring, it seemed like the boat had no power. I asked Diane to disengage the transmission and reengage to see if we could pick up some speed—nothing. We were drifting past some boats towards the coral reef. One thing I teach my sailing students is always to be prepared for something to stop working at the worst possible time.

I had paid close attention at the boat briefing and knew that there was no disconnect switch for the anchor windless, but that you had to open the forward hatch and retrieve a button box controller on a long cord that was stored on top of the forward cabin hanging locker.

I asked Diane to try to miss the other boats as we were barely making way with just the wind. I went below, opened the hatch and deployed the controller box. Then I sprinted above deck to the bow to cut away the lines securing the anchor and dropped the anchor in shallow water in almost the perfect place between a moored boat and the reef-lined beach.

Now the problem was what was wrong with the boat. The engine ran fine, but there was no propulsion. I thought that maybe the transmission linkage was disconnected, but that was fine too. A neighboring sailor came by on his kayak and dove on the prop to see if it had disappeared. No, the propeller was still on the boat, but the shaft seemed to move in and out more than it should. Whatever it was, it wasn’t something a charter captain was expected to fix.

I called Barefoot, and they sent a mechanic who determined that the shaft had broken. A very unusual failure for sure. Barefoot sent a boat to pick us up. I learned that even if you lose a couple of days due to a broken boat, some charter companies only give your credit for another trip.

In short, it was a learning experience, and we got stuck on a paradise island drinking piña coladas for a few days. Not all bad.

I love to teach sailing, but one disadvantage is not having the time to sail with my own family. If I we have a free spot on the boat and my wife is available, sometimes she will accompany me. It has always worked out well because I always appreciate having another set of experienced eyes on the boat to make sure I don’t miss anything.

One summer that I taught nearly every weekend, my wife decided she wanted to join my ASA (American Sailing Association) 104 (Bareboat Chartering) class for a refresher. She also decided she didn’t want to be “the Captain’s wife” for the weekend and didn’t want to tell the rest of the class that we were married. The other three students were male, and because it was a 104 class, all onboard had some experience sailing.

Diane introduced herself, and she got into the role of “student”. She said she and her husband were sailors. The guys wanted to know why she was taking the class by herself if her husband was a sailor too, so she said the first thing that popped into her head, “My husband is such a control freak that he has to do everything when we’re sailing.” I had to listen sympathetically while everyone commiserated with her. They all said they wished their wives were into sailing too.

Diane was quite pleased with herself when she nailed the docking exercises on the first try when it took the guys several times each, but she passed it off that she always brings the boat up to moorings, since her husband can’t steer the boat and pick up the mooring at the same time. Truth be told, I usually did all the docking before this, so maybe there is some truth to the controlling captain story.

Diane had a lot of fun joining in on the test prep and did a lot of coaching. We all had a pleasant dinner together. After, the students were to stay overnight on the boat at a mooring at Dodson’s Marina in Stonington. Diane declined to join them since she had stayed overnight many times and didn’t need that experience. I often leave my students to their own devices for the night and return home for the evening, so we both said our goodbyes and left for the night. We went opposite ways around the block and went to a nice bed and breakfast for the night.

We all met up for breakfast in town the next morning, and we never did tell the students we were married. I’ve probably blown her cover by telling the story, but we had fun while it lasted.

People give up a weekend and schedule for a sailing lesson weeks, sometimes months, in advance. I really hate to cancel a class since it is so disappointing for the students. I have taught an introductory class (ASA 101 Basic Keel Boat) in 20 to 30 knots of wind. I’ve taught a class in between rain showers, but the most challenging was a Coastal Cruising (ASA 103) class in heavy fog.

In the Coastal Cruising class, we do everything that is in an introductory class, plus we add navigation, anchoring, mooring, and man overboard drills. This particular class was on the Thames River in New London, Connecticut. The Thames River is less than half a mile wide, but on this day the fog was so thick that while we were sailing down the middle of the river, we couldn’t see either side.

So here I was with four students eager to learn with visibility of about five boat lengths. Fortunately, I know the river well and knew that just south of Crocker Boatyard there is a very nice yacht club called the Thames Yacht Club. On the west side of the Thames, the yacht club has a mooring field; and on the outermost edge of the mooring field, they moor a platform that they use for race committees. It is a platform about 20 feet square with a small roof. The club calls this platform the “The Queen Mary”.

Even though I couldn’t see the river bank or anything else, I kept our training boat within sight of The Queen Mary. We spend several hours practicing tacks, jibes, anchoring and MOB drills.

Then the US Navy decides to bring in a nuclear submarine. I never saw the sub, but escort vehicles would pop out of the fog for a minute or two then disappear. There was the sound of huge engines rumbling in the background.

Then of course about a half hour before we had to go home the fog lifted. The students got all their lessons in and had a great time. Other than a neckache from pivoting my head trying to see everything, it all worked out well.