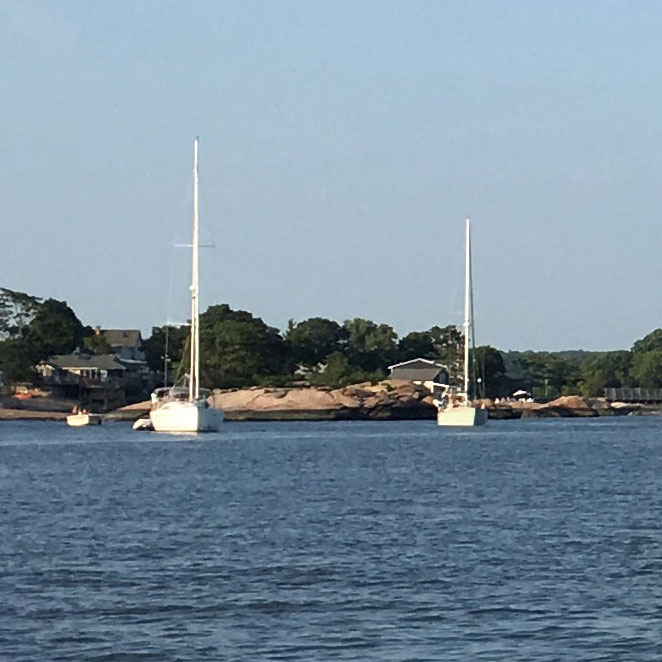 Long Island Sound is an amazing place to sail. We have hundreds of places to go including quiet anchorages, picturesque New England towns, beautiful marinas with pools and cookout grills. We also have first-class shopping, entertainment, and fine dining.

It is a great place to learn because we have a lot of challenging variety including, currents, rocks, nuclear submarines, ferries and lobster pots. I had one person tell me that when he told the rental agent of an island charter company that he learned to sail in Long Island Sound, the guy just handed him the keys. You really learn a lot fast sailing on Long Island Sound.

Do you agree that learning should be fun, interactive and delivered in a way that provides the shortest learning curve?  Sailing, just as with many other sports, requires theoretical knowledge plus hands-on practical training and experience to develop the skills required to become successful.

Welcome to East Coast Sailing School. Our courses will be of greater value to you because we spend less time in a classroom and far more of your time applying the practical skills themselves on the water.

About the American Sailing Association

The American Sailing Association was founded in 1983 with a simply stated mission: to teach people to sail safely and confidently. To achieve that goal, the ASA set out to establish standards against which to measure a sailor’s level of knowledge and skill, the first such unified standards in the U.S. to apply to sailors in keelboats.

After studying programs offered in other countries, the founders of the ASA selected the Canadian Yachting Association’s (CYA) “learn to Cruise” program and licensed it for use in the U.S. With this strong heritage behind it, the ASA has continually improved and expanded its educational system by drawing on valuable input from the ASA school network.

Today, the ASA is an association of sailing schools, charter companies, professional sailing instructors, and sailors, with over 300 affiliated sailing schools located throughout the U.S., as well as in Europe, Japan, Central America, Taiwan, China, and other far eastern countries. These accredited schools offer ASA certification to individuals who meet the requirements for a given level. To date ASA schools have certified nearly half a million sailors!

By establishing national standards for sailing education, the ASA has provided a way for more people to take part in the sport safely, with the proper training and respect for their responsibilities as boaters, ensuring that sailing will be safer, smarter, and more fun for everybody.